Natural Resource Economics in the Ancient World:
from Context to Economy 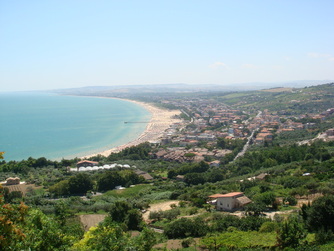 Bay of Naples (Veal)
﻿The GDP, or Gross Domestic Product of the ancient world, particularly the Roman Mediterranean world, has been a popular topic of research for some time.  Scholarship originally examined labour and material inputs, and manufactured goods, tracking the movement and trade of these through terrestrial and maritime archaeological excavation.  A new part of ancient economic research has been a greater focus on natural resource economics, especially of goods which provide energy sources to fuel the economy, namely: the types and costs of sustenance for slaves and agricultural draft animals; the value of energy obtained from wind and water power, and, of particular interest to me, the energy used to fuel the fires of manufacturing production processes; and to fuel domestic heating and cooking.  For the most part, wood, and wood charcoal, were the major fuels in the ancient world, although other forms of fuel, including coal were known, and alternative fuels such as charred olive lees, and animal dung were also used in places where wood was not abundant (and occasionally even when wood was available; olive lees, for example, provide a very high calorific fuel).  The study of fuel economics firstly requires the scientific analysis of fuel remains found in excavations, in order to identify the types of materials consumed.  In the case of wood fuel, that science is called charcoal analysis (or sometimes, anthracology).  Once identification has been carried out, interpretation is undertaken in light of ancient historical sources (if any), complementary archaeological data, and modern forest ecology principles,  keeping in mind the limitations of the original data, and possible sources of bias.  Economic quantification of wood consumption, a step on the way to examining the size of wood fuel's contribution to the ancient GDP, may be estimated through various  economic modelling techniques.﻿